Journeys Festival International – A unique festival setting a standard for 2017

After 46 days of events between August and October, 180 cans of spray paint, 110 metres of gaffer tape, 15 pop-up performances, a theatre world premiere of Belarus Free Theatre’s Burning Doors, a UK moving image premiere of Sanctuary/Sustenance: The Story of Many Journeys in the ethereal setting of Portsmouth Cathedral and an epic #JourneysFest Manchester Museum Take Over, we are proud to announce that Journeys Festival International showcased the work of more than 150 artists, both international and UK based, supported by 30 fantastic partner organisations, across 3 cities. The annual Journeys Festival International in Leicester, and our inaugural events in Manchester and Portsmouth have drawn to a close for 2016.

Across the host cities of Leicester, Manchester and Portsmouth four core strands of activity took place - Look Up, Coffee Shop Conversations, The Container Project and the presentation of Burning Doors by Belarus Free Theatre – amongst a huge variety of other events that were enhanced by the landscape of each city. With each programming decision, relevant to each city, a different audience was engaged with the work and the issues raised by Journeys Festival International.

The Container Project initiated the Festival in each city. A shipping container, symbolic of export and transference of place, was positioned in a significant location, becoming an innovative project space. Street artists were commissioned to transform the exterior of the container and provide an individual comment, illustrative of the Festival core mission. In Leicester, local urban artist N4T4 created a vibrant mural of a welcoming woman, with palms outstretched, indicating an all-important aspect of Journeys Festival International – celebration.

Manchester saw acclaimed graffiti collective Nomad Clan create a mural on the container in the city centre location of St Ann’s Square, reflective of their experiences in the Calais ‘Jungle.’ In partnership with contemporary art gallery Aspex, the Portsmouth container hosted the WELL-COME project to kick start the festival. Placed in the central square of the University of Portsmouth’s Faculty for Creative and Cultural Industries, local artist M-One worked alongside members of the refugee and asylum seeker community to produce a text based mural depicting a map of the world. The piece documented personal stories of displacement and travel across land and sea, in order to seek refuge. The container became a map, dotted with personal messages from the refugees’ experiences.

[Above] The WELL-COME Project, Portsmouth

For the duration of each Festival, the containers played host to innovative artistic projects, from screen printing (with City of Sanctuary and Leicester Print Workshop), Youth Cultures with unaccompanied young refugees working (with After 18 and Soft Touch Arts), to hosting pop up theatre performances – the containers were animated, both inside and out. 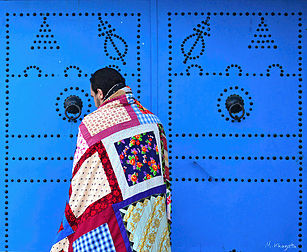 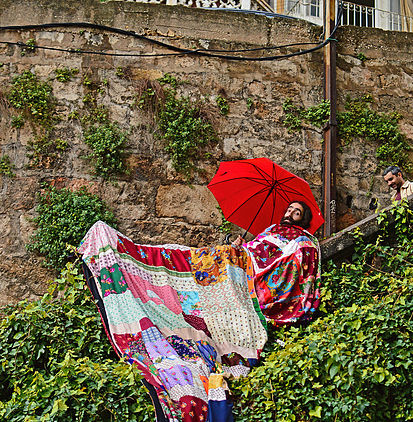 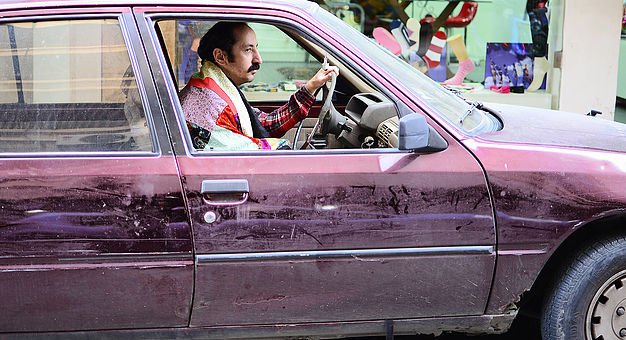 [Above] Stitching My Syria Back, Leicester Look Up

Look Up is a high impact, large scale outdoor visual arts exhibition that took place across the three cities and showcased bodies of work by three different artists, offerings a connecting space for the general public to engage with the artwork of an international refugee artist, in unexpected settings. In Leicester, Journeys Festival International presented the poignant photographic series Stitching My Syria Back by Syrian artist Mohamad Khayata. Khayata is currently seeking asylum in Lebanon, from his home in Syria. On his travels he has photographed dispersed Syrian refugees, shrouded in a colourful “Madeh,” a traditional Syrian patchwork quilt. As a result of Look Up, Khayata was invited to exhibit his paintings at the Beirut Art Fair, raising his profile and establishing himself within the arts scene of his temporary home.

In Portsmouth the Festival presented the work of internationally renowned Greek artist Nikos Papadopoulos through his Plasticobilism series. Papadopoulos creates dioramas that provide a thought-provoking comment on society, through the use of innocent Playmobil figures. The figurines offer a challenging comment on current refugee and asylum seeker issues. Papadopoulos then posts his artworks to his network of 30,000 followers on the Plasticobilism Facebook page. The challenge presented by the artworks stood out across the Portsmouth landscape.

[Above] Plasticobilism, Portsmouth Look Up

In Manchester the Festival presented The Beholder series by Jamal Jameel, a refugee from Iraq and photography student at Salford University. Jameel created a series of assisted self – portraits of members of the local refugee community, providing a realistic depiction of a group whose identity is very often skewered. ArtReach will be developing Look Up further to increase impact and profile in presentations next year. 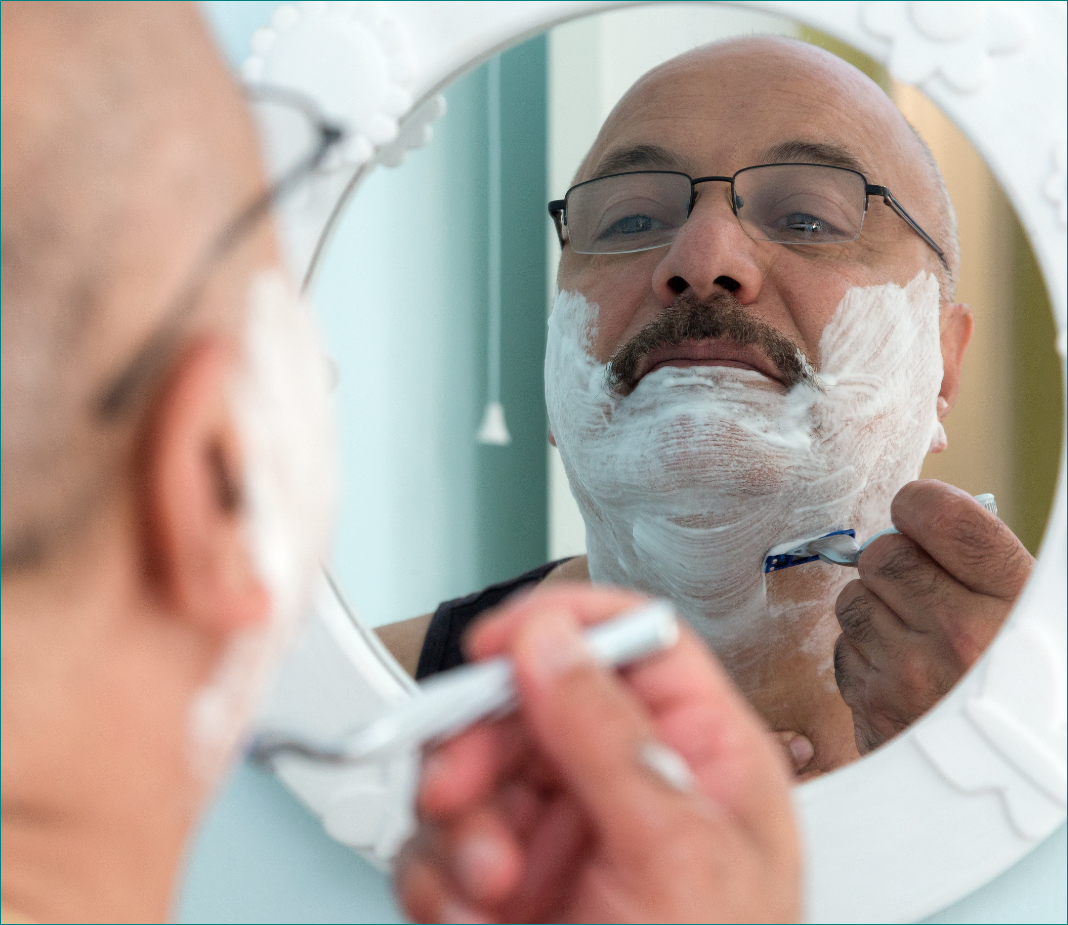 [Above] The Beholder, Manchester Look Up 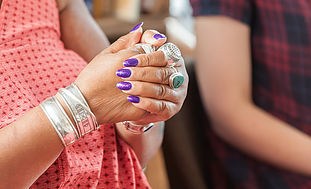 Across the three cities, nine Coffee Shop Conversations were held, engaging hundreds of people of varying ages and backgrounds in focused discussion groups. Each conversation had a chair and guest speaker, including TED X speaker and author Gulwalli Passarlay, ‘Woman of the Year’ Mariam Ibrahim Yusuf, critically acclaimed author Miriam Halahmy, and each of the featured Look Up artists (either in person or via Skype.) Thematically, the conversations ranged from the issues faced by unaccompanied young child refugees (Youth Impact), to how cultures connect and integrate when within the same geographical location (Connecting Cultures). The conversations provided a safe space for the audiences and contributing artists to engage, share and connect with each other. Each audience was different but responsive, questioning, contributing, learning and, most importantly, exploring how to raise further discussion about these difficult issues.

As a central part of Journeys Festival International 2016, ArtReach was proud to co-commission and present the blazingly contemporary theatre production Burning Doors by Belarus Free Theatre (BFT), the leading UK refugee theatre company. The BFT co-artistic directors seek political asylum in the UK, and rehearse via Skype with their company, still based in Minsk. Burning Doors told the true stories of three artists living under political persecution, for the sake of their art and their freedom who will not be silenced by their state. The stories focused on Maria Alyokhina from Pussy Riot, who made her stage debut in the production, Russian actionist artist Petr Pavlensky, and Ukrainian film maker Oleg Sentsov (who is currently facing 20 years in Russian jail and has an ongoing international campaign for his release.) A visceral, physical production that reflected the persecution and interrogation of the artists, Burning Doors was presented to packed audiences at Curve in Leicester, Contact in Manchester and New Theatre Royal in Portsmouth.

[Above] Audience reactions to Burning Doors at Curve, Leicester

In June 2016 ArtReach hosted workshops with Belarus Free Theatre co-artistic directors Natalia Kaliada and Nicolai Khalezin and theatre practitioners from each Journeys Festival International host city, Leicester, Manchester and Portsmouth. Inspired by this programme, a number of the participating practitioners went on to create pop up theatre performances that were later showcased as events in the Festival. With participation from members of the local refugee and asylum seeker community the pop up performances were presented in a variety of non-traditional theatre venues, such as the open city streets, the Container, or museums - always resulting in a captivated audience.

This year, Leicester hosted a Core Festival weekend (20-21 August) in Jubilee Square. A huge variety of free, interactive activity was presented to a receptive audience, with digital kite flying via The International Kite Project, hands on kite making workshops hosted by The Community Kite Project, a series of summer fete games Eastern Europeans for Dummies by performance duo There There, and the poignant procession Driftwood produced by Faceless Arts.

The music stage brought together international sounds and cultures in a variety of forms. Performers included the amazing vocals of Yasmin Kadi, the contemporary hip hop funk sounds of Afro Cluster (who graced the stage of BBC Introducing at Glastonbury earlier this year - from Worthy Farm to Journeys Festival International!) and the digital genius of Addictive TV. They gave a unique element to the music line up with the “Orchestra of Samples,” a project that connects 200 international musicians and intelligently stitches audio and video samples together into an electro-dance sound. A tangible element to their performance was added by the live accompaniment of Iranian percussionist Arian Sadr, who will now be continuing to collaborate with Addictive TV in the future, highlighting the connectivity and legacy that is integral to Journeys Festival International.

A unique element to the Manchester programme was our #JourneysFest Manchester Museum Take Over - a day of exciting performances, exhibitions and workshops, providing an inclusive platform for the celebration of unheard refugee and asylum seeker stories. The event engaged our work with almost 3000 members of the general public, a variety of ages, backgrounds and cultures.

To close the events in Portsmouth, and Journeys Festival International 2016 as a whole, was the UK premiere of the extraordinary installation, Sanctuary/Sustenance: The Story of Many Journeys, presented in the ethereal setting of Portsmouth Cathedral. The immersive, multimedia projection of photography, film and music gave viewers the opportunity to trace the journey of a family during the catastrophic events of displacement, and on their pathway to sanctuary.

[Above] Sanctuary/Sustenance: The Story of Many Journeys, Portsmouth Cathedral

As the last week drew to a close in Portsmouth the ArtReach team received the news that the JOURNEYS project had been selected to receive Creative Europe support, through a unique call for projects that support the integration of refugees through arts. The Call attracted 277 applications from across Europe, with only 12 selected for funding - emphasizing the quality of the proposals for developing Journeys Festival International with a fuller European dimension. The funding will support Festival development in the UK host cities in 2017, and involve collaborative partnership working and delivery of events in Hamburg, Rome, Palermo and Budapest. ArtReach will work with creative organisations across Europe, supporting refugees and asylum seekers in Germany, Italy and Hungary, providing opportunities for exciting connections and synthesis of artistic ideas between different countries.

Already planning from the learning and evaluation of the 2016 events, the ArtReach team is looking forwards to creating an exceptional 2017 program, exploring new possibilities and expanding the breadth of our work.

Nuturing Digital Connectivity and Creativity with our ROOTS Groups